Krestianstvo Luminary functional prototype is avaliable to try out at https://livecoding.space and it's source code at LiveCoding.space GitHub repository master branch

However, while working on LiveCoding.space project by Krestianstvo.org that is heavily based on Virtual World Framework (containing elements of Open Croquet architecture), I have started revising the current Reflector server. 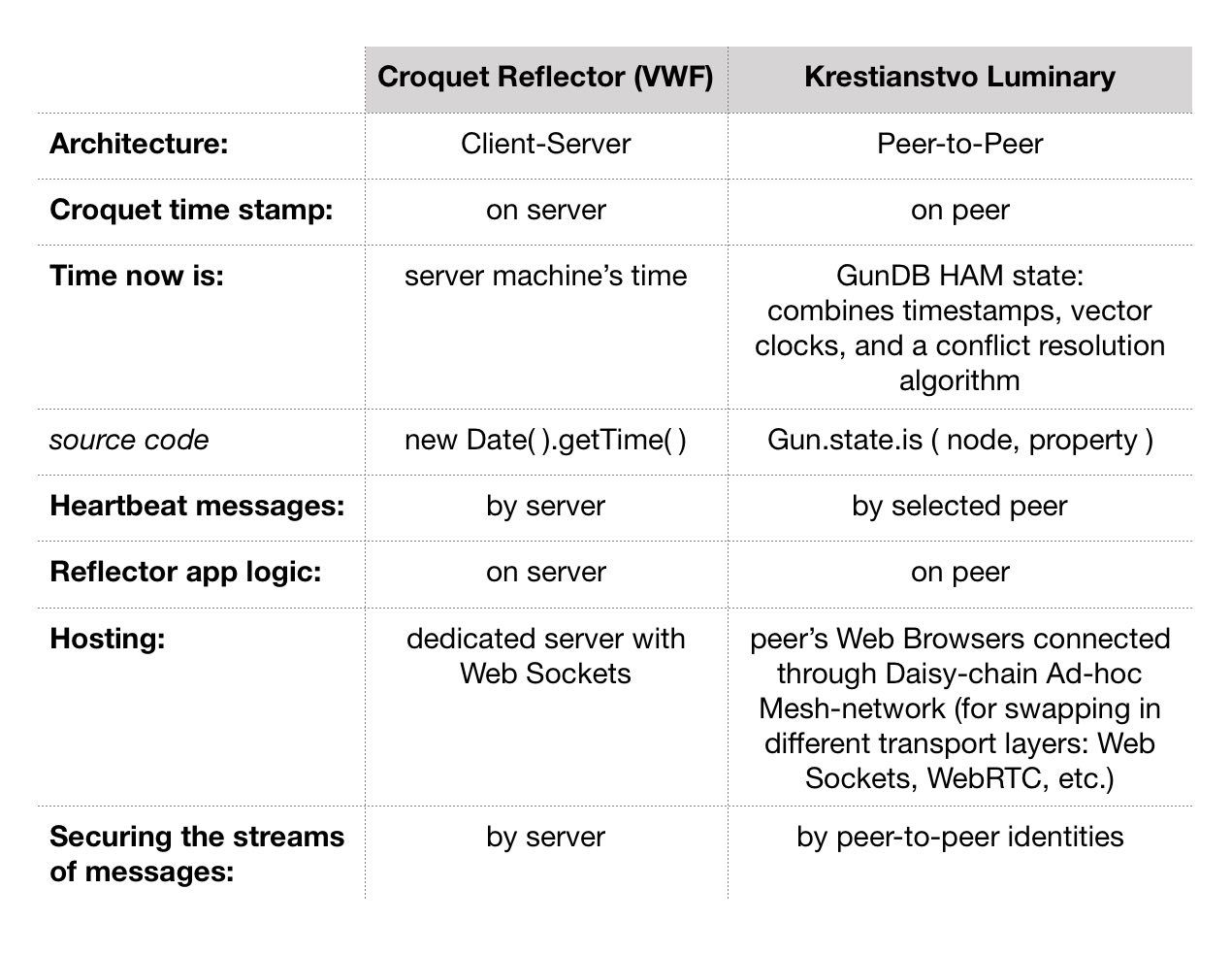 For those who are not familiar with Open Croquet architecture, just want to mark key principals behind it in simple words. 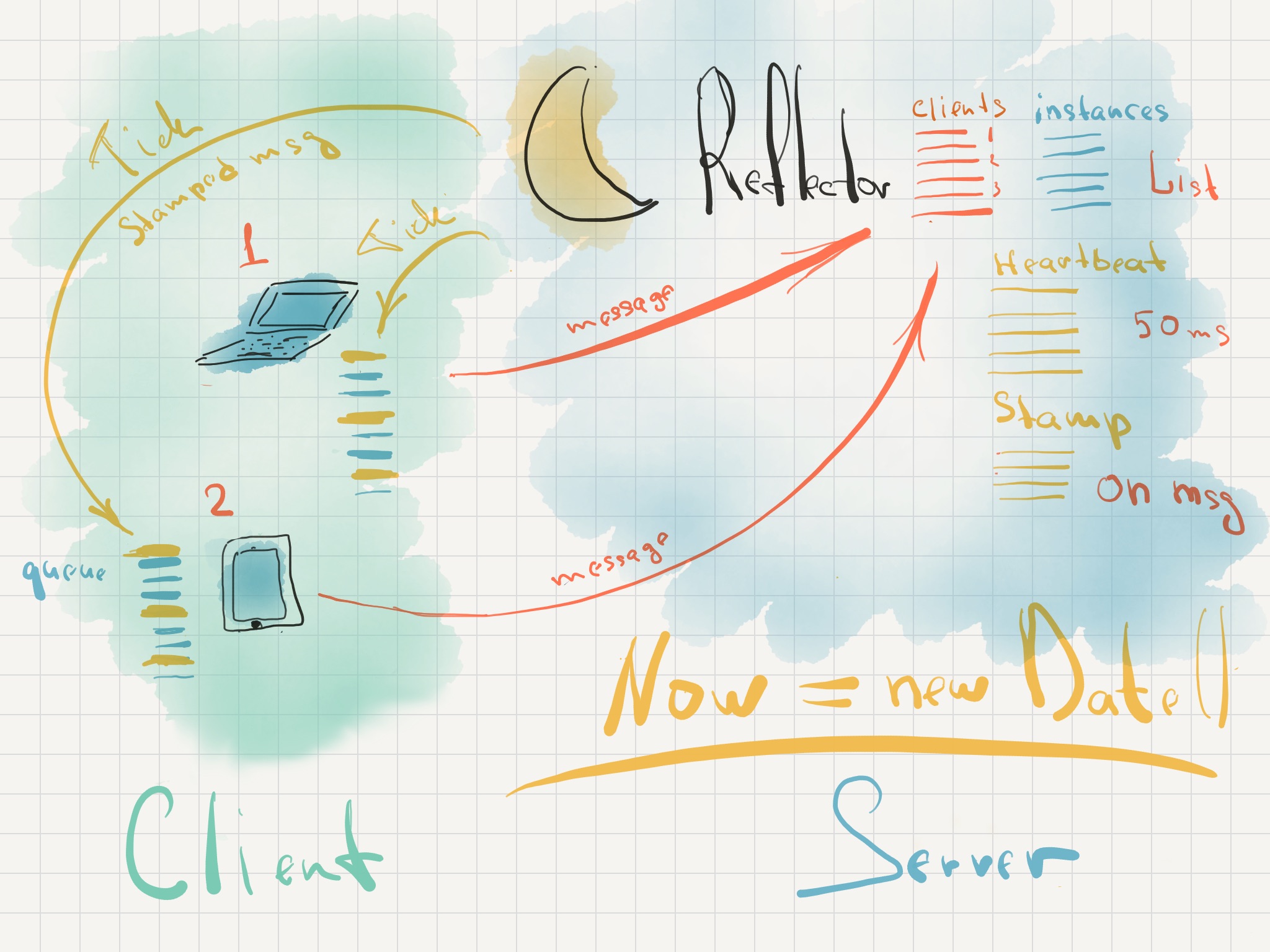 Croquet introduced the notion of virtual time for decentralised computations. Thinking on objects as stream of messages, which lead to deterministic computations on every connected node in decentralised network. All computations are done on every node by itself while interpreting an internal queue of messages, which are not replicated to the network. But these queues are synchronised by an external heartbeat messages coming from Reflector - a tiny server. Also any node’s self generated messages, which should be distributed to other nodes are marked as external. They are explicitly routed to the Reflector, where the are stamped with the Reflector’s time now and are returned back to the node itself and all other nodes on the network.
Reflector is not only used for sending heartbeat messages, stamping external messages, but also it is used for holding the list of connected clients, list of running virtual world instances, bootstrapping new client connections.

So, in Croquet architecture for decentralised networks, the Reflector while being a very tiny or even being a micro service - it remains a server.
It uses WebSockets for coordinating clients, world instances, providing ‘now time’ for the clients, reflecting external messages.

Let’s look how it works in Virtual World Framework (VWF). I will use the available open source code from VWF, which I am using in LiveCoding.space project by Krestianstvo.org

That’s a function returning time now by Reflector. Time is getting from a machine, running a Reflector server:
(server code from lib/reflector.js)

Then it uses to make a stamp for a virtual world instance:

Reflector send this time stamps using WebSockets. And on a client side VWF has a method for dispatching:
(client code from public/vwf.js)

Look at send and respond methods, where clients use WebSocket to send external messages back to the Reflector:

Now, let’s look at how Krestianstvo Luminary could identically replace the Reflector server. 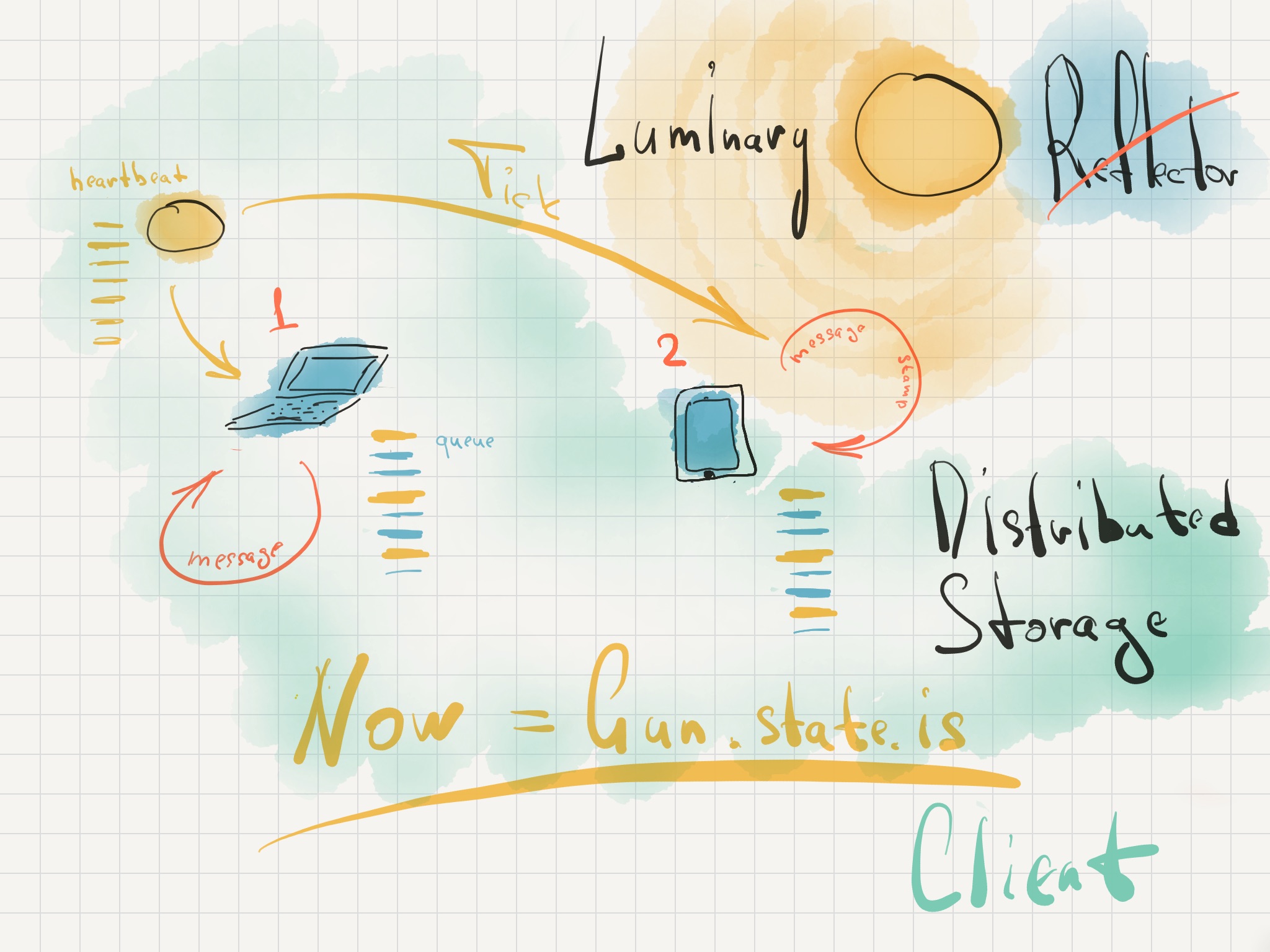 First of all clients are never forced using WebSockets directly from the application itself for sending or receiving messages. Instead Gun DB responds for that functionality internally. All operations which previously relay on WebSocket connection are replaced by subscribing to updates and changes on a Gun DB nodes and properties.
So, instances, clients - are just Gun DB nodes, available to all connected peers. In that scene, the required Reflector’s application logic is moving from the server to the clients. As, every client on any moment of time could get actual information about instance he is connected to, clients on that instance, etc. Just requesting a node on Gun DB.

Instead of using machine’s new Date().getTime(), Krestianstvo Luminary uses state from Gun’s Hypothetical Amnesia Machine, which combines timestamps, vector clocks, and a conflict resolution algorithm. So, every written property on a Gun’s node stamped with HAM. This state is identical for all peers. That’s meaning that we could get this state just on any client.
Taking in consideration that Gun DB guaranteers that, every change on every node or property will be delivered in right order to all peers. We could make a heartbeat node and subscribe peers to it updates.

Here is the code for creating a heartbeat for VWF:

Client, which start firstly or create a new virtual world instance, create heartbeat node for that instance and run a metronome (that part could be run on Gun DB instance somewhere on the hosting server, for anytime availability):

So, every 50 ms, this client will writes to property ‘tick’ the message content, thus changing it, so Gun HAM will move the state for this property, stamping it with the new unique value, from which the Croquet time will be calculated later.
The start time will be the state value of HAM at ‘start_time’ property, of heartbeat node. Please notice, that actual Croquet timestamp is not calculated here, as it was in Reflector server. The timestamp used for the Croquet internal queue of messages will be calculated on reading of ‘tick’ by the VWF client in it’s main application.

Here is the simplified core version of dispatching ‘tick’ on VWF client main app, just to get the idea: (full code on public/vwf.js, links below)

So, all peers will calculate exactly the same Croquet time on getting an update from Gun DB, regardless of the time when they get this update (network delays, etc).

As you could imagine, sending external messages will be as simple as just writing the message by a peer to an instance heartbeat with a new message’s content. All connected peers and a peer itself will get that message, stamped with Croquet time, while they are subscribed on changes on heartbeat node (look above at instance.get(‘heartbeat’).on() definition )

All advantages that Gun DB provides, could be applicable inside a Croquet Architecture. One of scenarios could be the use of Gun’s Timegraph. That’s will allow to store and retrieve the history of messages for recording and replaying later. Using SEA Security, Encryption, & Authorization library, will allow to create a highly secure instance’s heartbeats using peer-to-peer identifies and being deplyed anywhere, anytime available on AXE blockchain.

Krestianstvo Luminary functional prototype is avaliable to try out at https://livecoding.space

For making a fully functional prototype, there are still an issues in porting Reflector application logic to a functional-reactive Gun DB architecture nature. That concerns to the procedure of connecting clients to a running instance. As it is connected with getting/setting instance state, pending messages and then replaying them on a new connected peers. But, all that is not critical, as does not affect the main idea behind Krestianstvo Luminary.
There are performance issues, as Gun DB is using RAD storage adapter. But configuring several RAD options could be helpful, concerning opt.chunk and opt.until (due to RAD or JSON parse time for each chunk).

[UPDATED 10.2019]
The source code of the latest functional prototype is avaliable under master branch at LiveCoding.space GitHub repository

The raw code is available at LiveCoding.space GitHub repository under the branch ‘luminary’.

The branch ‘luminary-partial’ contains working prototype of partial Luminary, when one master-client is chosen for reflector logic, it uses Gun.state() for stamping messages, as it was done in the original reflector app, and then distribute as updates to other peers through Gun DB.

Thanks for reading and I will be gladfull if you will share your comments and visions on that. 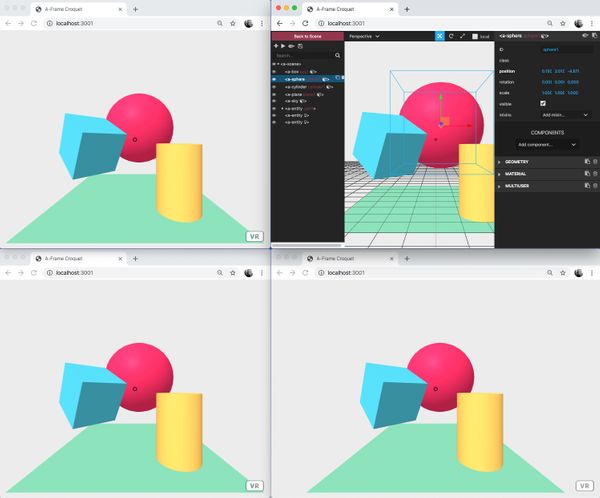 The component allows easily, while staying in A-Frame scene definition (plain HTML file), to add a multi-user features onto A-Frame entities in scene. Create Croquet (aka Croquet V) simulations on

UPDATED 03/2020: Please use the latest code and instructions for that Open Croquet integration from GitHub project https://github.com/NikolaySuslov/croquet-squeak. There is also a fix for using